The British Are Coming!

Sorry, sorry…I’m a pun whore from way back and there’s just no stopping me. Lol! But no lie, friends: The next sexy Englishman in my British Invasion series has arrived! 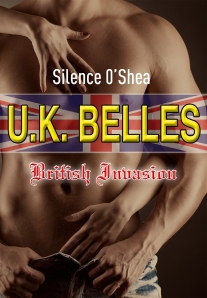 UKB features Sean, the fun blond playboy introduced in U.K. Kink. And can I tell you what a colossal pain in the ass he is?! OMG, he gave me fits during the writing process, bitching up a storm about my chosen conflict. So loudly that the story was sidelined for just over two months before I sewed together the tattered remains of my pride and just did what the man wanted. Sigh… I’m so easy. In the end, Sean knew all along what his story should be, and I’m pretty pleased with the results. I’m definitely in love with Maribelle, Sean’s heroine (and the accountant for the Fire from Lancashire male revue), the intrepid woman who steps up and offers her help — and her heart — when Sean’s in danger of (gasp!) being deported. I hope you love both of them as much as I do!

They’d been arguing about her proposal for an hour and Mari’s confidence was waning rapidly. She was just about to declare defeat when she saw the first crack in Sean’s impenetrable wall of denial.

“So…all you want is money?” Sean eyed her warily, clearly still unsure of her motives. Not that she could blame him. She’d been overseeing his finances for years, and while he had initially approached her like he approached all women—in full-on flirt mode—Mari had done little more than stammer and blush through those early encounters. It wasn’t long before Sean had decided she was all business, and their semi-regular meetings had become fast, if no less friendly affairs.

Mari hadn’t realized how much she’d enjoyed his flirting until he’d stopped. She discussed favorite authors with Oliver and Simon, both of whom had a fondness for suspense and horror and, like Mari, a secret love for all things Harry Potter. With Jay, she discussed cooking. The man was something of an amateur chef, and he’d taken Mari under his wing after she’d confessed she could barely boil water. Even she and Dominic had kickboxing in common.

But Sean was a closed book. Since assuming her disinterest, he’d been polite, friendly, receptive to financial advice…one of the easiest clients she had. But she knew little about him. Oddly enough, over the years, the less he’d divulged, the more Mari wanted to know. His reputation was that of a perpetual playboy, but there had been glimpses of introspection and thoughtfulness in his frequently amused eyes. It was in those moments Mari suspected Sean was more than the sum of his parts—as sexy as those parts were.

She didn’t know if Sean would allow her to crawl inside his head, get to know the man behind the stripper façade. Perhaps one day. But at least where money was concerned, Mari had a feeling he wouldn’t object to her plan. He had plenty, thanks to her shrewd investment suggestions, and U.K. Kink paid for the house and nearly all of his expenses. He wasn’t a spendthrift and his attitude toward his mild wealth was more “that’s nice” than anything else. In fact, Sean had seemed oddly admiring when she’d claimed this arrangement wasn’t about love. Mari didn’t feel she had the right to ask his thoughts on something so personal—yet.

“Well, naturally there are…sensitive things we’ll have to discuss. We’ll both be interviewed. I have friends who did this, and they were asked some pretty intimate questions during the interview. We’d have to know certain…um…things about each other.” She found herself blushing again.

Sean smirked. “That’s the least of my worries. Sex isn’t all hearts and roses for me, luv. I’ve got no problem shagging your lovely arse so I can pass an interview.”

“Listen, I just mean I’m not the commitment sort. I’m only twenty-five, luv; haven’t given a thought to settling down. But if we’re married, I’m guessing you might get your knickers in a twist if I bring home some pretty bird to share our bed. Sorta puts a cramp in my lifestyle.”

“I assume so. But you can have a spare room for your…birds. As long as you keep all your clothes and things in our room. And we don’t have to sleep with each other for the interview. There are other ways to learn what we need to know.”

Sean gave her a look that was part indulgence, part sarcasm. “How you figure? Truth or Dare?”

She pursed her lips in a slight smirk. “I was thinking just, you know, some deep discussions.”

Sean stared at her in silence for so long, she began to squirm on her stool.

Finally he nodded slowly. “Let me see if I’ve got this right. We’ll be married, but we won’t have sex. We’ll share a room, but I can avail myself of a guest room if I want to bang a female visitor. And in exchange for all this non-sex and a non-dutiful wife, I give you money to help you get a business off the ground. Is that what you’re proposing, luv?”

Mari squirmed again. “Well, when you put it like that—”

Her heart stopped and stomach plummeted. All her blood rushing down to pool in her feet and leave the rest of her icy cold and tingling. “No?”

“No.” Sean shook his head once again, his blond bangs swaying to cover one intense blue eye. He shoved his fingers through his hair to push it back and skewered Mari with a stern glare. “Oh, I’ll help finance your business—but I expect something in return.”

Now his eyes turned predatory and a slow smile stretched his full lips. “Sex, of course.”

Her body went from frigid to feverish in the space of a breath, the tingling intensifying as it took up residence in decidedly more interesting body parts. She struggled to speak and emitted a series of high-pitched squeaks akin to that of a mouse being sat on by a two-ton elephant.

She cleared her throat roughly and tried again. “Uh…sex?”

U.K. Belles is available at Amazon, B&N, Smashwords and Kobo